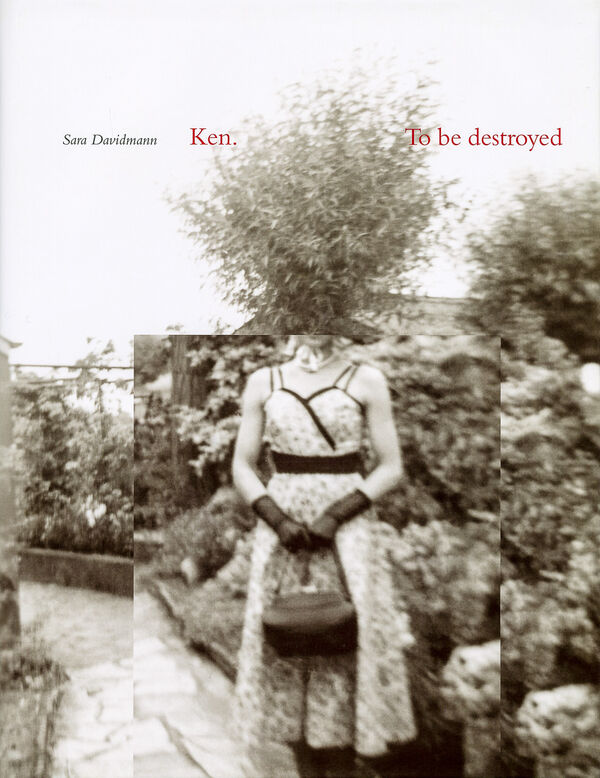 132 Seiten, 25 x 32 cm , 1204 g.
Sara Davidmann | Schilt Publishing
Sara Davidmann – Ken. To be destroyed
Statt 50,00 € 15,00 €
Inkl. MWSt., zzgl. Versandkosten
Lieferzeit: 2 bis 6 Werktage (weltweit)
In den Warenkorb    Auf die Wunschliste
This project began with an archive and a discovery. Sara Davidmann and her siblings inherited letters and photographs belonging to her uncle and aunt, Ken and Hazel Houston, from her mother, Audrey Davidmann. The letters chronicled the relationship between Ken and Hazel. Hazel had been a dental secretary. Ken practiced as an optician in Edinburgh. It emerged soon after they were married that Ken was transgender. In the context of a British marriage in the 1950s, this inevitably profoundly affected both their own relationship and their relationships with the people around them. They remained together from 1954 to the end of Ken’s life. They had no children.

The archive contains letters, photographs and papers. Hazel and Audrey wrote to each other frequently in the late 1950s and early 60s, after Hazel discovered that Ken was transgender; these letters tell Ken and Hazel’s very private story. Publicly, Ken was a man, but in the privacy of the home he was a woman.

In response to the letters and family photographs Sara Davidmann has produced a new set of photographs using analogue, alternative and digital processes. Looking at the vintage photographs, she became acutely aware of their surfaces. The marks of time and damage had become part of the images. This led her to work on the surfaces of the photographs she produced using ink, chalks, hand colouring, magic markers and correction fluid. In the series ‘The Dress’, ‘Closer’, ‘Dealt with in Scotland’ and ‘Looking for K/Finding K’, Davidmann has created works which interrogate and question the position of art practice within the exploration of archives.

‘Sara Davidmann’s work is an on-going investigation into the meanings of the archive and Ken’s condition as well as her own family history. A hybrid of history, archive material, literature, photography and painting, Ken is a complex and challenging project that sits between fact and fiction.’
Greg Hobson for 1000 Words Magazine