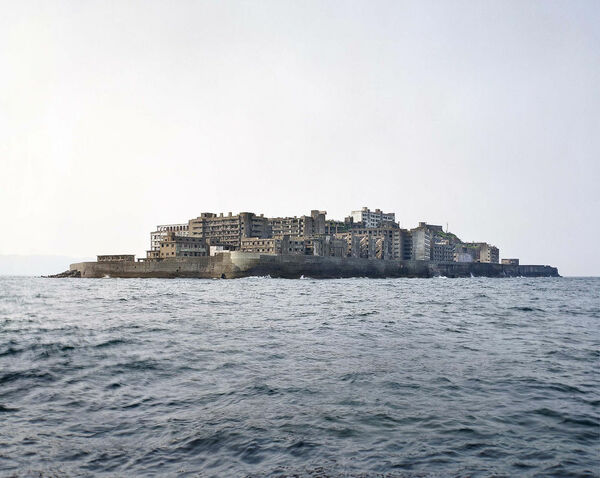 108 Seiten, 36 x 28,8 cm , 1662 g.
Marchand & Meffre | Steidl
Yves Marchand & Romain Meffre – Gunkanjima, l'île cuirassée
(French edition)
Statt 65,00 € 15,00 €
Inkl. MWSt., zzgl. Versandkosten
Lieferzeit: 2 bis 6 Werktage (weltweit)
In den Warenkorb    Auf die Wunschliste
Hashima is a small island located off the extreme southwest coast of Japan, about ten miles from Nagasaki. Its darkwarship-like silhouette earned it the nickname of Gunkanjima (“battleship island”). During the wave of industrialisation in the nineteenth century, a coal seam was discovered on the island and the Mitsubishi corporation opened a mine there. Workers settled on the island and the population increased, the small mining town quickly becoming a modern and autonomous settlement.

During the 1950s, Gunkanjima became one of the most densely populated places in the world with over 5,000 inhabitants. But after an accident and the restructuring of the Mitsubishi mining project, the mine closed in January 1974. The last inhabitants deserted the island, the connection by boat was suspended, and since then Gunkanjima has become a ghost town.

Marchand and Meffre photographed the island between 2008 and 2012.