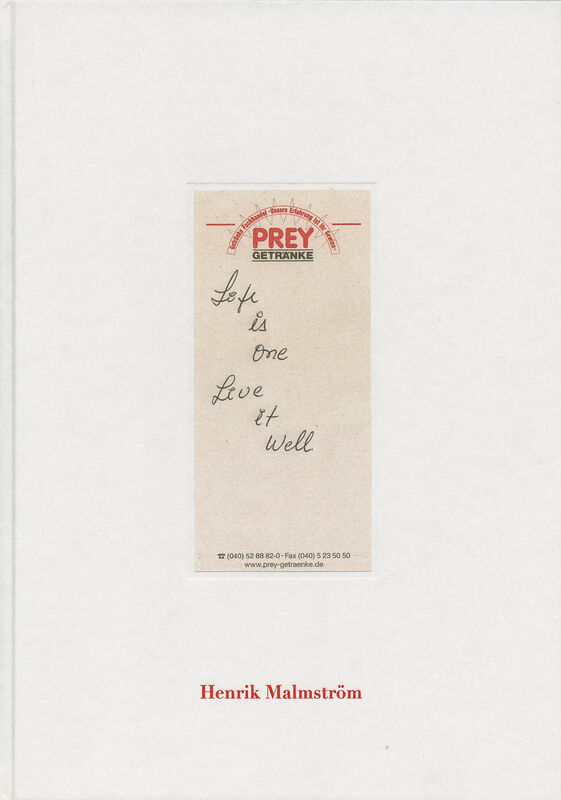 256 Seiten, 21 x 30 cm , 1520 g.
Henrik Malmström | Kominek Books
Henrik Malmström – Life is One Live it Well
68,00 €
Inkl. MWSt., zzgl. Versandkosten
Lieferzeit: 2 bis 6 Werktage (weltweit)
In den Warenkorb    Auf die Wunschliste
Life is One Live it Well takes us back to the dodgy area of St. Georg in Hamburg and to many of its barrooms: Mickey Mouse, Windstärke 11, Zum Frühaufsteher, Rund um die Uhr, Moin Moin, Treff Hamburg-München, also the Vanessa Bar, Dschungel Bar, Rubin Bar, Moulin Rouge, Zar und Zimmermann and the Astra Stübchen. Now that the party is over, these bars have turned into mausoleums of the good old times and fading testimonies of a quartier that is frenetically changing under the effect of gentrification and the ban on street prostitution.

Henrik Malmström was curious to know what was actually happening inside these places. So, he started frequenting them. For four years, he befriended regulars, bartenders and clients. He became one of them. Then a sort of photo metamorphosis happened through the life in the bars of St. Georg. Like a cockroach, his camera, started crawling on the floor recreating what it feels like after a night of solitary rounds.

Balloons, velvet cushions, faded wallpaper and champagne –decayed fragments of the old fancy times, all shot with flashlight, all in close-up. They could perfectly be the snaps of a drunkard.

And then, it’s people. Living characters. Life’s rebels. Moralists call them the prostitutes, pimps, underdogs and petty criminals of Hamburg’s streets of shame. But, in fact, what they are is common people living their lives the best they can. Just like everyone they want to hang out, have fun and some beer.

Somewhere between the bittersweet fatalism of Rainer Werner Fassbinder and the deadpan mien aesthetics of Aki Kaurismäki, Malmström recreates in colour a contemporary “Café Lehmitz”. Its ambience is imbued with visual stylization and a warm-hearted emotional immediacy towards its people who just want to be left in peace and “drink their bitter cup of broken dreams”, as the famous Finnish tango artist Olavi Virta sings. After all, life is one, so you better live it well. Thank you for the visit.

Finnish photographer Henrik Malmström (b.1983) currently lives and works in Buenos Aires, Argentina. His work is often the result of the interaction with his immediate surroundings. In 2010 he self-published On Borrowed Time, his first book of photographs. In the same year he moved to Hamburg, Germany, where he developed and completed his two projects “A Minor Wrongdoing” and “Life is One Live it Well” by 2014. He is the co-founder and curator of the Müllkellergalerie, a premium art gallery located in a garbage room in Hamburg, Germany. In 2015 he co-founded the online platform Vaciarte, that deals with arts and politics in Buenos Aires.