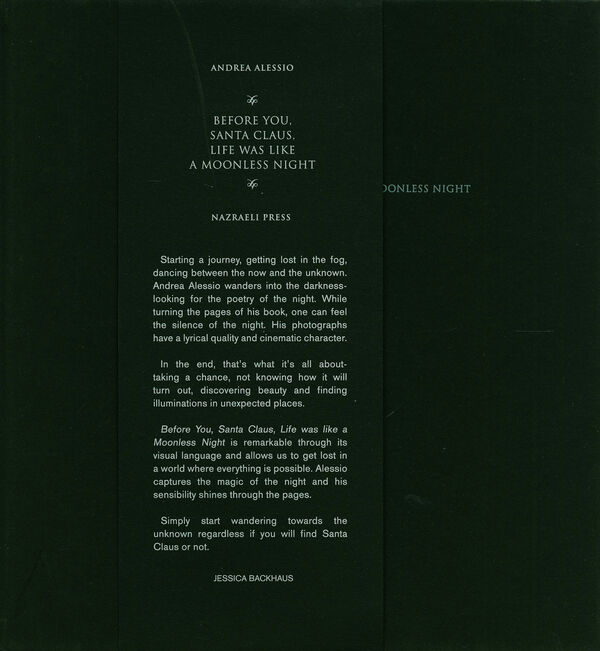 72 Seiten, 25,4 x 26,7 cm , 940 g.
Andrea Alessio | Nazraeli Press
Andrea Alessio – Before You, Santa Claus
Life Was Like a Moonless Night
65,00 €
Inkl. MWSt., zzgl. Versandkosten
Lieferzeit: 2 bis 6 Werktage (weltweit)
In den Warenkorb    Auf die Wunschliste
A night journey through Northeast Italy, immersed in the silence and in the darkness of the night, if it weren’t for those Christmas lights. A small light and everything is transformed, we see the road, we understand where to look, where to go.”– Flavio Franzoni.

Before You, Santa Claus, Life was like a Moonless Night is published to coincide with Andrea Alessio’s solo exhibition at Micamera, Milan, in celebration of their 10th Anniversary. The book’s 31 images, masterfully sequenced, were made in and around Treviso, where the artist lives. Situated in northeast Italy, not far from Venice, Treviso was once among the wealthiest areas of the country, but is currently facing an economic crisis. Following the Second World War, the landscape was subjected to violent commercial exploitation. Alessio photographed this landscape in near darkness - the only illumination in these pictures is that made by Christmas lights. Melancholy, sad, and heart-wrenchingly beautiful, the book reads as pure poetry from beginning to end. Andrea Alessio was born in Venice in 1966, and currently lives and works between Treviso and Venice. His work has been widely exhibited in Italy, and more recently in the United States. Before You, Santa Claus, Life was like a Moonless Night is published in a first edition of 500 copies.