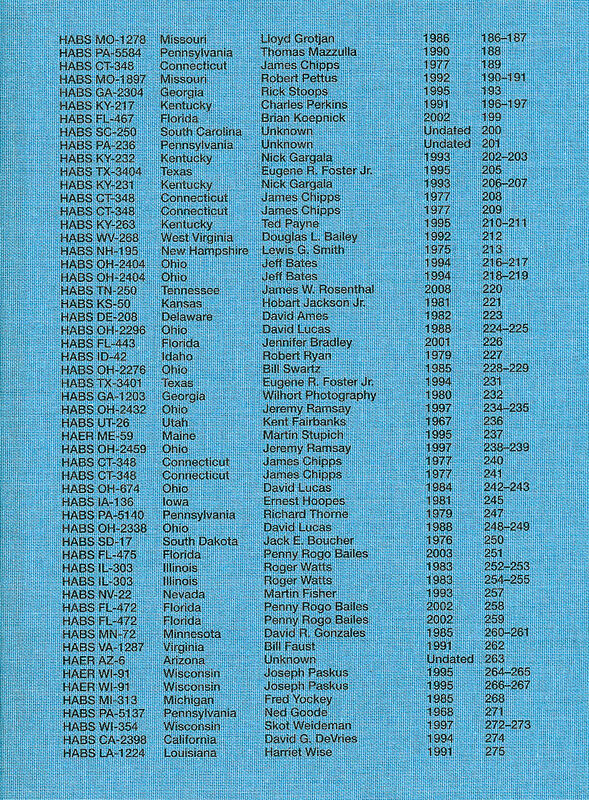 368 Seiten, 17 x 23,32 cm , 985 g.
Jeffrey Ladd | MACK Books
Jeffrey Ladd – A Field Measure Surveay of American Architecture (sign.)
45,00 €
Inkl. MWSt., zzgl. Versandkosten
Lieferzeit: 2 bis 6 Werktage (weltweit)
In den Warenkorb    Auf die Wunschliste
Drawing from the nearly half a million photographs and documents comprising the Historic American Buildings Survey held in the US Library of Congress, this book constructs a fictional ‘one-way road trip’ across the United States, weaving north and south across the Mason-Dixon line while tacking west. In A Field Measure Survey of American Architecture, Jeffrey Ladd uses the HABS archive as a surrogate in order to manifest a portrait of his former country at a moment when its democracy seems imperiled.

Inspired equally by the social documentary work of Walker Evans and the architectural interventions of Gordon Matta-Clark and others, Ladd embraces the muteness of photographs to create an ambiguous space where the sculptural, political, forensic, and fictional coalesce within a landscape of both beauty and fragility. What initially appears to be a single voice is revealed to belong to dozens of makers; what seems a description of the distant past is revealed to be closer to the present than expected. A Field Measure Survey sheds light not only on this remarkable archive but on the proliferate meanings that can be shaped from its images.