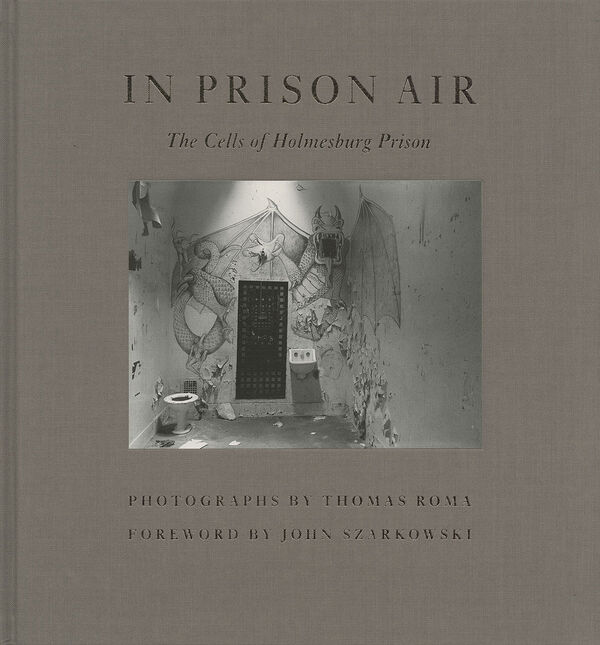 96 Seiten, 31 x 33 cm , 1223 g.
Thomas Roma | Powerhouse Books
Thomas Roma – In Prison Air
The Cells of Holmesburg Prison
Statt 35,00 € 8,00 €
Inkl. MWSt., zzgl. Versandkosten
Lieferzeit: 2 bis 6 Werktage (weltweit)
In den Warenkorb    Auf die Wunschliste
In 1999, photographer Thomas Roma found himself within the walls of Philadelphia’s Holmesburg Prison, one of the most notorious prisons in the United States, doing a special photographic project for Steve Buscemi’s Animal Factory. During downtime Roma wandered through this nineteenth-century fortress, walking in and out of many of its seven hundred or so cells. After Holmesburg’s inception in 1896, it quickly became the prison for Philadelphia’s worst criminals, eventually packing up to five prisoners into six by eight foot cells designed for single-occupancy.

After leaving the site, Roma found his mind often inhabiting the space of the prison with its halls of flaking paint and graffiti-covered cells. Overwhelmed by the evidence of the lives spent inside those small rooms, Roma returned to photograph on his own, creating the images now collected for „In Prison Air. The Cells of Holmesburg Prison“.

Holmesburg, closed in 1997, is perhaps most well known for a series of scientific experiments carried out on its prisoners over a period of twenty-five years. Sponsored by the U.S. Army, the CIA, the University of Pennsylvania, The Dow Chemical Company, and Johnson & Johnson, the experiments tested the effects of substances ranging from deodorants and hair dyes to LSD and BZ to radioactive isotopes and chemical warfare agents. The cells are now empty of the men that endured their squalor, but their presence remains through the detritus and graffiti accumulated over the prison’s century-long history, etched indelibly into Roma’s master lens.