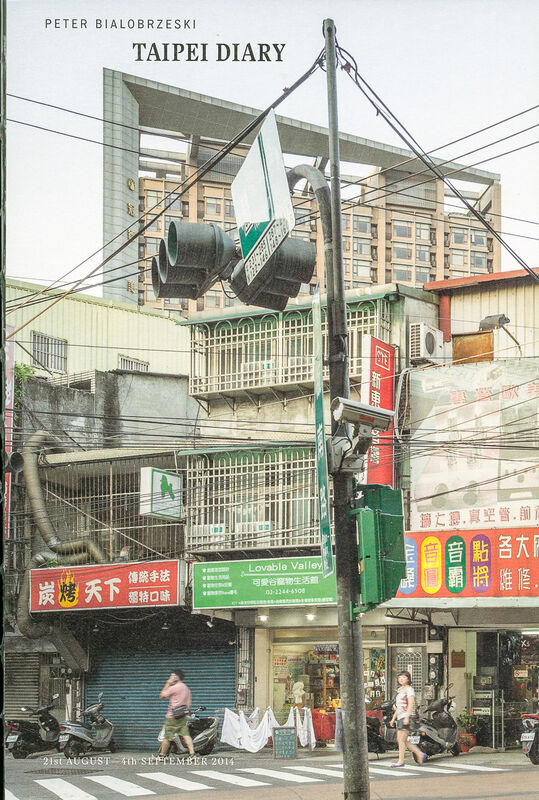 112 Seiten, 14 x 21 cm , 485 g.
Peter Bialobrzeski | The Velvet Cell
Peter Bialobrzeski – Taipei Diary
21st August - 4th September 2014
30,00 €
Inkl. MWSt., zzgl. Versandkosten
Lieferzeit: 2 bis 6 Werktage (weltweit)
In den Warenkorb    Auf die Wunschliste
In Taipei Diary, Bialobrzeski turns his gaze on the ‘temporary capital’ of the Republic of China – a country that doesn’t exist, and yet continues to defy expectations. Taiwan is claimed by China as a province, despite having its own military, currency and democratically-elected government. Taiwan experienced its own economic boom in the 1980s, but has, since the rise of China, struggled to maintain such growth.

“In 1949 the Kuomintang, led by Chiang Kai Shek, fled the mainland to take refuge in Taiwan. They declared Taipei the provisional capital of the Republic of China. […] The Kuomintang believed for a long time in the provisional. That resulted in an underdeveloped infrastructure and an overspend on “defence”, which in reality was saving up for aggression. The exile to the island of Formosa was only a step on the way to kicking Mao and his Reddies out of the mainland. You don’t have to visit Taiwan to find that idea very amusing when you look at “Red China” today.” – Extract from Taipei Diary

Peter Bialobrzeski is a world-renowned photographer and the recipient of several awards including the prestigious “World Press Photo Award” in 2003 and 2010. He is also the author of over ten photobooks, including “Cairo Diary”, “Athens Diary” and “Wolfsburg Diary”, also published by The Velvet Cell.