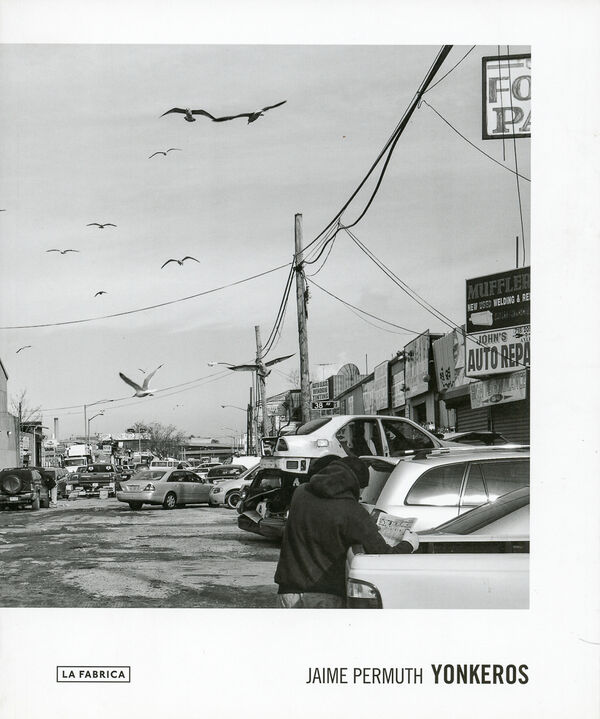 144 Seiten, 20,5 x 24,5 cm , 488 g.
Jaime Permuth | La Fábrica
Jaime Permuth – Yonkeros
Statt 30,00 € 10,00 €
Inkl. MWSt., zzgl. Versandkosten
Lieferzeit: 2 bis 6 Werktage (weltweit)
In den Warenkorb    Auf die Wunschliste
La Fábrica publishes Yonkeros, the volume containing the eponymous series by the Guatemalan photographer based in New York, Jaime Permuth. A documentary work which immortalizes this microcosm of New York's Queens neighborhood where for decades, thousands of people - mostly immigrants- earn a living from the business of scrap metal and auto parts. Willets Point is an improbable landscape: Broken down streets interrupted by stagnating pools of water and raw sewage; scattered heaps of scrap metal and the rusting, gutted shells of automobiles; a billion dollar stadium rising above it all; and in the sky overhead the constant traffic of airplanes beginning their descent into La Guardia Airport.

This book is entitled Yonkeros after the vernacular term that describes businesses that specialize in junk and scrap metal. The word is a corruption of the English junk, which becomes yonk to the Latin ear, and is then conjugated correctly in Spanish, so yonkero comes to mean the person who works with junk.

95, mostly black and white images of "the Iron Triangle". Images of its streets and its people, day or night, cold either hot. "These photographs pay tribute to Willets Point and its vast accumulation of parts, which, like all catalogues, is also a poem" explains Permuth.