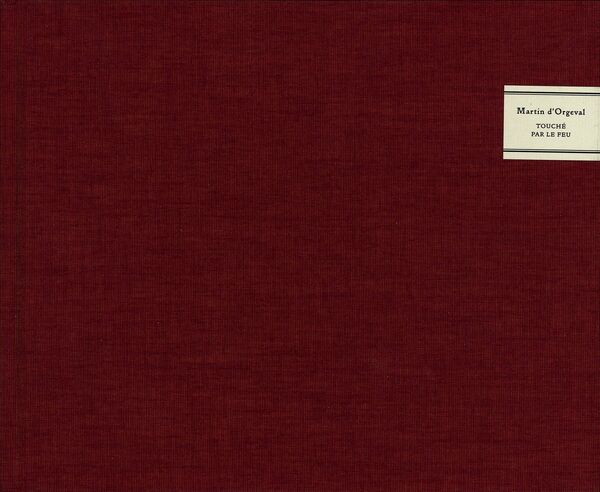 24,4 x 19,8 cm , 686 g.
Martin d'Orgeval | Steidl
Martin d'Orgeval – Touché par le feu
(French edition)
Statt 38,00 € 9,95 €
Inkl. MWSt., zzgl. Versandkosten
Lieferzeit: 2 bis 6 Werktage (weltweit)
In den Warenkorb    Auf die Wunschliste
On 1 February 2008 at 5.00 a.m., a fire ripped through Deyrolle, the famous old entomology and taxidermy store in the heart of Paris. Its historic collections of thousands of butterflies and rare insects, stuffed animals and minerals, built up since it opened in 1831, went up in smoke, and with them the memories of generations of schoolchildren, dreamers and enthusiasts fascinated by their motionless beauty.

Stuffed, mounted and classified, the specimens of a wide range of species conserved by this world-renowned institution were at best singed and at worst reduced to ashes. That which Man and science had taken from the natural cycle of life and death and fixed forever for our wide-eyed pleasure was partially brought back to its original destiny: the fading and disappearance that awaits any creature. Time had been made to stand still, and Nature had reclaimed its rights.

Martin d’Orgeval’s photographs show the animals and insects that survived the disaster in situ, against a background of charred woodwork in the shop that had been their habitat since their ‘natural’ death. The objects and the location form an entire work, the result of a strange, unique process in which creation, conservation and destruction have followed on from one another – a process completed and given closure by photography.